Are you a fan of games with an Ancient Egypt theme? Then let’s embark on a mysterious journey to Egypt with Eye of Horus: The Golden Tablet slot online, one of the masterpieces among online slot games. As the title suggests, this game has an Egyptian theme and is inspired by Horus, the god of heaven and royalty, protector of Egypt.

Casino:Novibet
Code
100% up to 250€ Welcome Bonus from Novibet!
United States of America is restricted.
Claim It

You will be happy with this latest release from ReelTimeGameing which takes you back in time for another rich adventure to meet the divine son of Osiris and Isis. You need to seek Horus’ favour and find unsung riches under his gaze.

Featuring an Ancient Egypt theme, and a relatively short list of special features, Eye of Horus: The Golden Tablet game should be an interesting option for the players that have enjoyed the rest of the games in the series.

You’re playing with 5×3 reels in Eye of Horus: The Golden Tablet casino, and there will be 10 active lines for you to use. This is a slot machine that offers to expand Horus Wilds, scatters, and free spins with upgrading symbols.

Ancient Egypt is a popular and commonly used slot theme, utilized, so we’re looking at the interior of a pyramid or ancient temple. Seasoned gamblers will be impressed by the slot’s elementary graphics and plain visual appearance. The playing grid, symbols, and all other elements are specific and particularly eye-catching!

You will see in Eye of Horus: The Golden Tablet demo that both the name and the theme are displaying the ancient temple where Egyptian gods are guarding the treasures of pharaohs.

In general, the universal template and visuals are delightful for the eye. We miss some ambient, oriental music in the background, though, but hey, back in times, brick and mortar bleeps were a thing.

If you wish to play other great slot games from the same collection, here are some suggestions: Gong Hei Gong Hei and Bubble Bubble 3. 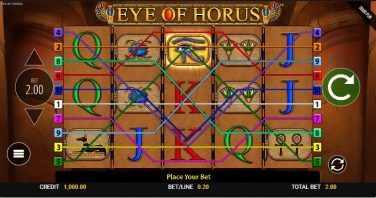 Eye of Horus: The Golden Tablet is a high variance slot game. The expected winnings may be scarce in number but most probably lavish in size. This may sound exciting, but it could be threatening for inexperienced gamblers. Using a strategy is a must when playing highly volatile slots.

Besides, the Eye of Horus: The Golden Tablet RTP rate is 95.20%. The coefficient could be better especially given the machine’s variance. Still, RTPs of above 95% are considered advantageous in the long run. Remember that the return to player rate is abstract!

The paytable is made of authentically designed A-J royal symbols and six hieroglyphs of a higher value. In order of value, you have a pair of fans, Ankh crosses, the scarab beetle, the eagle, and Anubis. Of course, the Eye of Horus is the most rewarding symbol of all, paying 50x your bet for 5 of a kind.

Eye of Horus: The Golden Tablet Review shows you the game has 10 lines, paying from left to right and remaining active the whole time. The game features a handy Autoplay, allowing 10, 25, 50, 75, or 100 auto spins.

The bird-like god of Horus is the wild symbol that substitutes all symbols on a pay line. Moreover, it expands to fill an entire reel as soon as it lands on reels 2, 3, and 4. The wild symbol plays a crucial role in the bonus round and during gameplay in general. 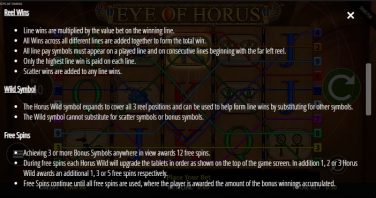 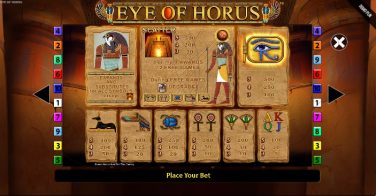 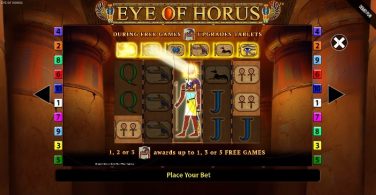 The Eye of Horus: The Golden Tablet free spins round is active as soon as you land a minimum of three scatters on the reels. When the bonus is triggered, there is a special bonus animation, and although it looks rather simple and basic, it is a refreshing sight in an otherwise graphically static game.

Speaking of scatters, those are the ones with the image of the Temple. When landing on 3 or more reels, they can bring the player 12 free spins. Each appearance of an expanding wild will give you 1 extra spin.

Play Eye of Horus: The Golden Tablet slot online and follow each time a wild symbol hits the reels, alongside upgrades to one of the hieroglyph symbols. This reaction will basically increase your chances to fill all positions with the symbol of the highest value.

How to play Eye of Horus: The Golden Tablet

Start by playing Eye of Horus: The Golden Tablet demo by registering and making your own account on SlotsCalendar, and see that its minimum bet requires $0.10 per spin, which would mean $0.01 per active line. You can increase it as needed from that point, even up to $100 per spin ($10 for each line).

The alternative of  Eye of Horus: The Golden Tablet free play gives you a great opportunity to test the game and see how you like it before you can commit to making a real money wager. You can play as many spins as you like. If you’re playing the demo version, you will be awarded virtual funds, but even if you lose them you can just reload the game and start over.

Eye of Horus: The Golden Tablet slot online offers a maximum win of 50,000x the bet, but no more than £250,000. Although the sum is delightful, it will hardly attract high-rollers as well. The maximum payout rule applies for single hits or accumulated earnings during the Free Spins feature.

With the Ladder Gamble option, you can get to increase the amount you’ve won, but gradually. There are no more than a few games with a feature like this, not to mention that this option in Eye of Horus: The Golden Tablet game comes with another option within the gamble feature, making it possible to go double or nothing. 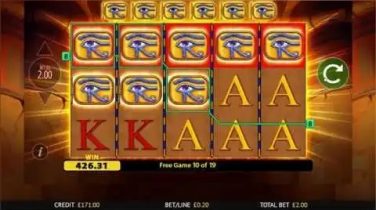 Eye of Horus: The Golden Tablet casino is an amusing and original game, although the theme isn’t a unique one. It is not quite clear why the Ancient Egypt theme resonates so well with slot fans. Maybe it’s the fact that some of these games have reached almost iconic status.

All in all, the Eye of Horus: The Golden Tablet game concept stands the test of time, regardless of whether you’ve played newer Egyptian-themed games or not. Unfortunately, the gods didn’t pay much attention to the visual composition, but overall it’s good, we don’t want to bother them, so we rate it an 8 out of 10.

If you want to have the benefit of this slot with real money, you can snatch one of our Eye of Horus: The Golden Tablet Free Spins No Deposit Bonus Offers that we come up with on this page. No worries if you do not see one right now. We have many more bonuses for a ton of slots. Register at whichever one you want and start playing for real money!