The god of the underworld instilled a ferocious fear in Ancient Greece. It’s said that people were too scared to pronounce his name, thinking that this may bring their end. Fortunately, the Power of Gods: Hades demo game cannot inspire fear or bring the end, just the end of your boredom!

Casino:LevelUp Casino
Code
Up to €400 + 200 Bonus Spins Welcome Package from LevelUp Casino!
United States of America is allowed.
Claim It

We’re not living in Ancient Greece and we can pronounce Hades without fear. We can even pronounce Power of Gods: Hades because today we’re exploring this slot. We will delve deep into the underworld with an adventure that will raise the temperature considerably! No, it’s not a stylistic figure, it’s really hot down here!

It’s time to immerse in a theme that will warm up your spirit! This ancient greek theme with fantastic hues animated by Hades cannot leave you cold! It’s actually pretty fiery, as fiery and tempered as the god of the underworld!

The design depicted in the Power of Gods slot is bold, fierce, and inspires a combustion of energy. With such a visual composition, you can conquer the underworld! 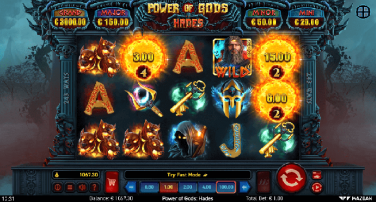 If you want to be delighted with more creations provided by Wazdan, we can offer these suggestions: Magic of the Ring Deluxe and Black Hawk Deluxe.

Power of Gods: Hades RTP hits a percentage of 96,14%, and this value is mixed with a variable volatility. Yeah, it’s true, it seems hard to believe, but in this slot, you choose the volatility! It can be low, medium or high, you decide, but don’t forget that a high volatility may be tricky if you try it with real money because it can set your budget in flames.

The Power of Gods: Hades slot delights its players with an attractive selection of special symbols, as special as the greek gods. In this fiery and feisty adventure set in the age of the gods, the game will be warmed up by a sticky bonus symbol, jackpot symbols and mystery symbols.

The sticky bonus symbol can bring players closer to the Hold the Jackpot round. The fiery symbols will award prizes that vary from 1x to 15x multipliers, and the sizzling blue fire symbol can spice up the game by accumulating the values of the fire and blue fire symbols.

The jackpot symbols heat up the game with mini, minor, and major prizes, while the mystery symbols will top up the game transforming regular symbols into special symbols. But if we talk about mystery symbols, we cannot forget the Hades symbol, this fierce element promises a jackpot win.

If you emerge with the power of gods, the odds are that you cannot feel bored, because the selection of bonus features looks thrilling!

Hold the Jackpot: in this round, the sticky bonus symbols will do their tricks. It’s good to know that this bonus round is triggered by a winning combination of 6 bonus symbols. 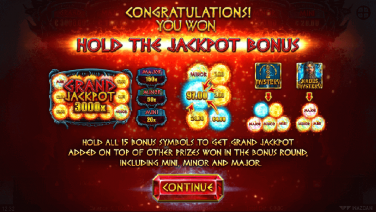 Jackpot Feature: this game introduces jackpot symbols, and collecting these flaming hot symbols, players will be awarded with a mini, a minor or a major jackpot based on the values of the collected symbols. 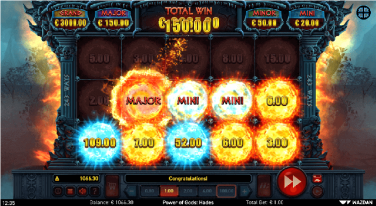 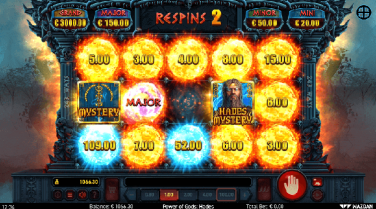 Grand Jackpot: the grand jackpot proposed by this game looks thrilling, it goes up to 3000x of the bet. This precious prize can be achieved with 15 reels filled with bonus symbols. 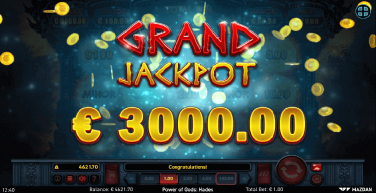 How to Play Power of Gods: Hades

The Power of Gods presents itself as a 5 reels video slot and 243 paylines that generate a thrilling and dynamic race that cannot leave you cold.

If this looks like your type of exquisite venture, enter the underworld! You just have to set a preferred bet value, hit the spin button and see where Hades will guide you!

Playing the Power of Gods: Hades for fun without high expectations when it comes to material gains, cannot leave you cold with such a thrilling greek mythological venture, but if you’re curious about the value of the highest prize, know that it goes up to x5000 of the initial bet.

We have to leave the underworld, but not before marking the Power of Gods with a 10 out of 10. We do not offer this score because we’re scared of Hades, just because it deserves it. The plot is astonishing, the visual composition is bold, fiery and along with the marvellous bonus features, the Power of Gods: Hades becomes the perfect background or battleground for an exquisite and thrilling adventure.

There are plenty of wonders in the underworld, but we haven’t found free slots games there, because the fantastic realm of free games is outside, on SlotsCalendar!

If you’re brave enough to venture into the mysterious and magnetic underworld, you can grab some Power of Gods: Hades free spins no deposit bonus offers provided by top-rated online casinos to catch more courage.

Keep in mind that you need an account on SlotsCalendar to enjoy the newest online slots with astonishing features and thrilling plots.